It always is dangerous to make longer-term predictions based on where technologies or service providers are at the moment. The reason is simply that capabilities can change rapidly, even unexpectedly.
Over the last couple of decades, it has been argued that the United States was “way behind” Europe in use of mobile phones, way behind Japan in access speed, or more recently that Europe as “way behind” the United States in http://darellsfinancialcorner.blogspot.com /2010/03/us-to-lead-in-4g-deployment-does-it.html" style="text-decoration: none;">4G network availability and adoption.
Others have argued that U.S. Internet access prices were high, compared to other countries perceived as leaders. But price is relative. One has to adjust for general price levels across countries, and then to adjust for retail plan differences, to derive price per megabit per second, for example.
Even in 2007, when the price differentials were said to be quite disparate, on a cost per Mbps, U.S., French, German and Japanese prices were comparable.
The point is that such gaps always have closed. 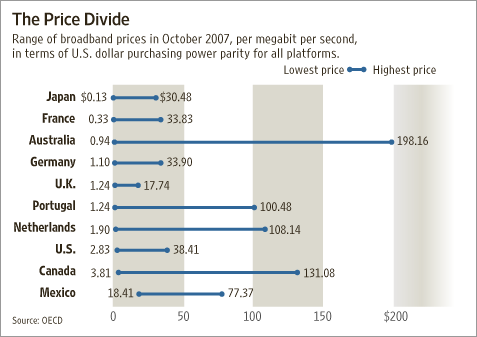