More than half of U.S. adults (125 million) had a musculoskeletal pain disorder in 2012, according to the U.S. Centers for Disease Control. Though it is not yet clear that connected health devices can help people manage or alleviate such pain, the wide extent of such problems suggests the potential for such innovatins.
Just over 20 percent of U.S. adults had arthritic conditions (22.1 percent) or lower back pain (20.3 percent). A smaller percentage of persons reported having non-arthritic joint pains or other joint conditions (17.5 percent) and neck pain or problems (14.3 percent).
Some 9.8 percent had sciatica issues. A significant proportion of the population reported having at least one other musculoskeletal problem that was not examined independently (28.1 percent).
Pain also is correlated with another problem, namely lack of sleep. The 2015 Sleep in America Poll found that pain is a key factor in “sleep debt:” Some 21 percent of people have experienced chronic pain and lose 42 minutes of sleep due to it; 36 percent have experience acute pain, resulting in 14 minutes of lost sleep each night. 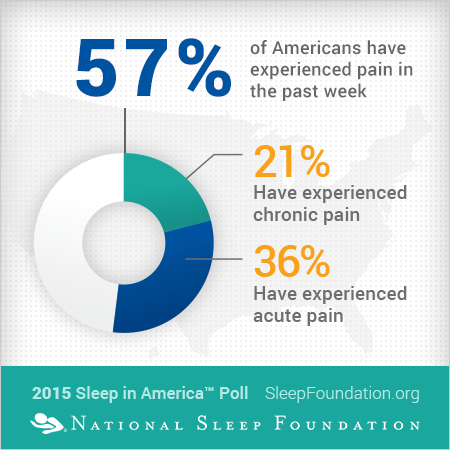