Home » Unlabelled » A Powerful Social Media Has Been Launched in Nigeria

A Powerful Social Media Has Been Launched in Nigeria

A Powerful Social Media Has Been Launched in Nigeria

Nigeria has come a long way in terms of technology. Just like the popular saying goes, “we no dey carry last at all”. But then, there has been something that many Nigerians and Africa as a whole has been trying to achieve for long, but with limitations, and that’s building a website that has Facebook features. But this thought has only been a wish for many. Many others have gone beyond just wishing, and tried but failed along the way. It has always been as if the social networking sites or community can only be created by the whites. Though, some years ago, some group of South African programmers programmed an app called 2go, but that can’t be compared to Facebook in terms of features. 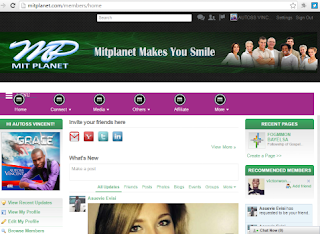 Facebook, Instagram, Linkedin and Twitter had been created for long, by the Americans, and now, may I introduce to you a new but very powerful social network launched few months ago by a young talented Nigerian. It’s called Mitplanet. You can go to www.mitplanet.com to SignUp and start flexing with it. For now, Mitplanet don’t give full support to any of the mini browsers like opera mini or Uc mini, they recommend the following browsers.

What Makes Mitplanet Unique?
Below are the top four features.
1) You can send an invitation message to your friends in other social network like Twitter, Google, etc. During or after SignUp. (That of Facebook friend's invitation is still being worked on).
2) Breaking news at Supersports, Goals.com, Aljazeera, etc., will reflects in the news section of Mitplanet. So now you don’t have to open other tabs to sort for news updates while in Mitplanet, because you got everything there.
3) You can import all your photos from Instagram, Flickr, and Picasa even without upload afresh. This is great for saving your megabyte. The CEO promises to add that of Facebook photo upload later.
4) When viewing it from the desktop, you can filter your search, when sorting for new friends. To access this feature you have to go through the menu and click on members. You can then see the filter search at your right. 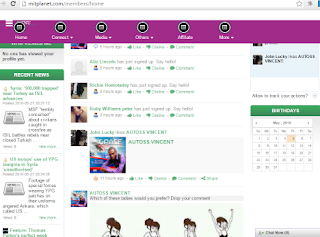 For now those are the top four working features. The CEO of Mitplanet has promised ever more greater features to be launched soon.

Related : A Powerful Social Media Has Been Launched in Nigeria