May 26, 2016: Euro Championship 2016 is approaching near, it is about two weeks for the one of the biggest football tournament to held in France. The matches in the tournament will be held from early morning of Jestha 29, Saturday for a month which is June 10 to July 10. The no of teams has been increased from traditional 16 to 24, 4 each in six groups. The group stage matches will be followed by round of 16, Quarter finals, Semifinals and the final. After the group stage matches, top two teams from each group (2X6=12) and the four best third placed teams among the six will go for the round of 16. All the matches are known to be held in 10 stadiums in 10 cities of France.
Two times defending champion Spain is always my favorite but I will tell about the winning prediction after watching two matches of each team in group stage. Group D can be called group of death as Spain, Czech and Croatia are on it. I put my eyes on Germany which is easy for them to get through to the knockout stages.
Before it was not known which television channel will be airing the matches live in Nepal but my belief for the National television of Nepal (NTV) having the rights to broadcast it, comes out not to be true.
Update: It is known that Sony ESPN and SIX will be airing the Eurocup matches in Nepal.
As the timing for the important games are at 00:45 am, I am sure most of the football fans will be sacrificing their sleep to witness the energy and excitement. Other timing are 6:45 pm and 9:45 pm.
The countries in each group are:
Here is the schedule of the group stage matches in Nepali date and time (GMT+ 5:45)
Click to enlarge and save the image. 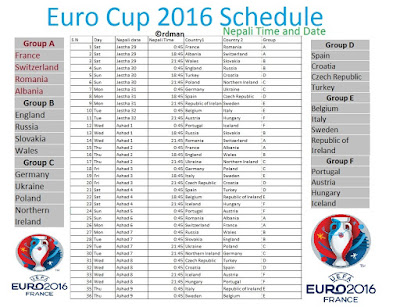 And here is the schedule of knockout stages match in Nepali standard Time (NST) and date.
Click to enlarge.