Keeping a "Happy Face," or Tremping Teaches Faith in Gd

Keeping a "Happy Face," or Tremping Teaches Faith in Gd

The other day's tremp home from work was one of those classic "Gd is Great" days for me.

After working morning shift and doing some shopping in Rami Levy, I said goodbye to a few friends/fellow staff and walked out of the gated compound. Yes, as I've written before Rami Levy has his stores, meaning the supermarket that bears his name an Yafiz the clothing store owned by his daughter Yafit, where I work, fenced in with extra security staff. 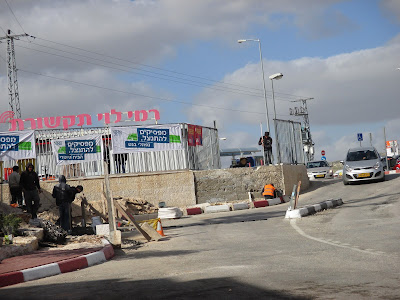 Just as I got close enough to see the passing cars beginning to exit the "compound," I noticed a neighbor's car going by. He didn't see me. I tried to signal him, but his eyes were on the other vehicles, as it should be. Earlier I had noticed him in the supermarket, but I didn't bother him trying to get a ride, since I didn't know how much time it would take for either of us.
And just as I was about to get upset by the near miss, I caught myself and repeated the mantra in my head:

"It will be fine, even better! I will get home just fine."

And then, suddenly a car stopped. It was a friend from Ofra who was going home, noticed me and offered me a ride. I happily got in, secure in the knowledge that I was on my way and had a chance to spend time with someone I rarely see.
A ride to Ofra is the halfway point between Sha'ar Binyamin, where I work, and Shiloh. There are bus and tremp, hitchhike options there, so I was pretty optimistic that my little mantra was working. There are also more ride options to Shiloh than from Sha'ar Binyamin.
And even though there were many people of all ages waiting, within a few minutes a car stopped and the driver signalled me into the front seat. It was another good friend. Thank Gd I got safely home straight to the door.
Gd is Great!!