Today will be marking another special moment in the history of tech giant Apple, as the stage is set for their today’s annual launch event.

Apple fans across the globe have for long ticked this date on their calendar and have patiently waited for the day to come where Apple is expected to be thrilling them with the latest gadgets and possibly software release.

Expectations have been high all these while and that one device that have been garnering much attention and that the world is waiting to see in today’s launch event is Apple’s flagship iPhone 7. 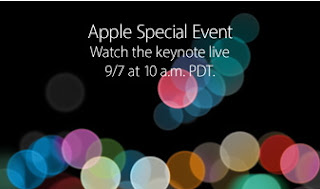 Credit: Apple
And yes all eyes will be on Apple today for the unveiling of what will be considered as the most prestigious iPhone device.

Nevertheless, as customary to Apple, fans of the tech giant should not expect total overhaul of the iPhone 7 from its predecessor iPhone 6.

Like the iPhone 6 that came last year in 2 variants of iPhone 6 and iPhone 6 Plus, you should also expect to see the about to launch iPhone 7 coming is similar fashion.

There is strong indication that Apple will be ditching the earpiece jack in the new device, leaving the device with only one port, which is also an indication that fans might be forced to opt for wireless Bluetooth accessory.

Or on the other way round the iPhone 7 small lightning charging port might be up for dual functionality, serving also as head jack port.

Definitely there will be improved camera for better image capture with the iPhone 7 and you should expect to see dual lens camera on the larger version.

The iPhone 7 is expected to be waterproof just like its rivalry  http://darellsfinancialcorner.blogspot.com /2016/08/see-price-of-newly-launched-samsung.html" target="_blank">Samsung Galaxy Note 7 and you should be seeing more space and improved speakers.

The iPhone 7 home button can be converted to touch sensor as rumour has it and more colours will be seen; for example, black iPhone 7 might surface this time around.

The design might well be that same iPhone device that you are familiar with, and as stated earlier that you should not be expecting much new features from the upcoming iPhone 7 because those complete turnaround of the iPhone that you are expecting to see might be coming in way in 2017, where Apple will be planning big ahead of their 10th anniversary.

On the other news, Apple’s major rival in the smartphone realm, Samsung, seems to have beaten Apple this time around to launch their flagship Galaxy Note 7 before now.

But first to launch might not necessarily entails overall market dominance, more especially as Samsung have been faced with recent embarrassing situation, where their newly launched Galaxy Note 7 devices have been marred with battery defect causing explosion, and has forced Samsung to recall the devices.

Finally, in all ramifications of today’s Apple launch event, Apple will be hopping and expecting their new device to come out a deal breaker for the company.