In 2016, Virgin Media has about 19 percent market share of U.K. Internet access subscribers. Yet, in 2014, Virgin Media had 56 percent of “superfast” connections.
In 2016, Comcast had about 24 million U.S. Internet access customers, compared to 16.6 million for AT&T and seven million served by Verizon.
Comcast has in operation a program to upgrade 100 percent of those locations to gigabit Internet access.
Verizon does not yet have a gigabit fixed network upgrade program in place. AT&T is building actively, but it is unclear how many customer locations actually are passed. CenturyLink also is building aggressively.
Google Fiber has not released customer account numbers, but is believed to serve accounts in the low six figures.
That means Comcast alone will have more gigabit-capable locations than all the other ISPs put together.
In both U.K. and U.S. markets, then, cable operators are supplying a disproportionate share of all “superfast” (24 Mbps to 100 Mbps), 100-Mbps and higher, or gigabit capabilities. 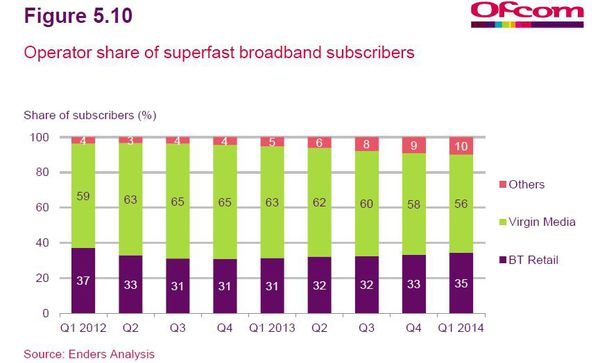 Over the medium term, virtually all access platforms--and some new platforms not yet tracked--will be supplying gigabit connections.