Over the past several decades, it would have been a reasonable question to ask why entertainment video service prices grew faster than inflation, while retail prices for communications services (voice, texting, Internet access) declined, either on a price-per-unit basis or in terms of absolute price per unit.
The answer is simple: entertainment video is about the purchase of content, not access to content.
Compared to voice, texting or Internet access, entertainment video is more akin to fashion than a utility service. And that means retail price is not a direct function of production cost.
That is clear in the latest Federal Communications Commission report on content prices in the U.S. linear video market.
However, given diminished consumer appetite for the traditional “big content bundles” and a shift to over-the-top or on-demand viewing, it will be necessary for most, if not all, providers to “just say no” to content providers and restrict the size of bundles.
That is going to shift the way content gets to market, with increasing amounts of programming moving through new services such as Netflix and Amazon Prime.
According to a new FCC report, the average monthly price of expanded basic service (the combined price of basic service and the most subscribed cable programming tier excluding taxes, fees, and customer premises equipment charges) for the communities surveyed grew by 2.7 percent over the 12 months ending January 1, 2015, to $69.03, compared to a decrease of 0.1 percent in the consumer price index.
That is to say, linear video prices rose by an order of magnitude more than the overall level of consumer prices.
This compares to a compound ten-year average rate of increase from 2005 to 2015 of 4.8 percent in the price of expanded basic and a 1.5 percent increase in the CPI.
To be sure, linear video providers have argued in the past that prices are up in large part because the number of channels offered in bundles has grown.
The price per channel (price divided by number of channels) for subscribers purchasing expanded basic service decreased by 1.8 percent over the 12 months ending January 1, 2015, to 46 cents per channel.
Over the 10 years from 2005-2015, the price per channel has declined by 1.4 percent on an average annual compound basis.
In the past, consumers might not have had as much choice. In the future, they will. Prices are going to come down. Still, the issue is whether entertainment video might still outperform voice, texting or Internet access, in some cases, in terms of absolute revenue contribution, price per unit or profit margin. 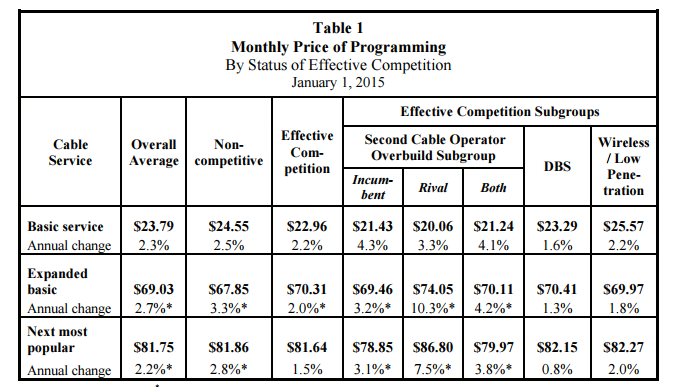 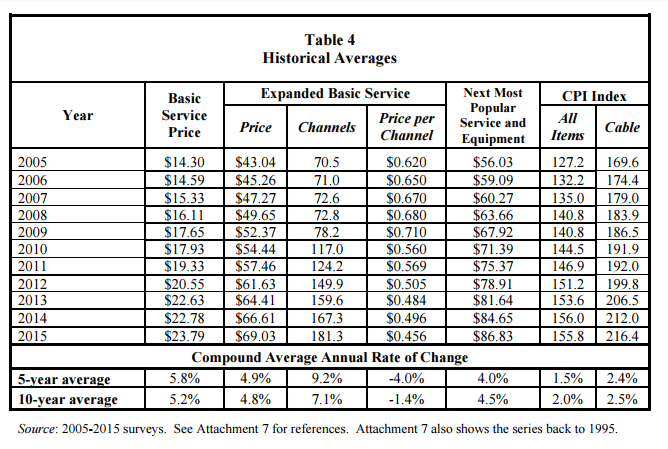 Related : The Reason Why Video Entertainment is The Only Service To Increase Prices