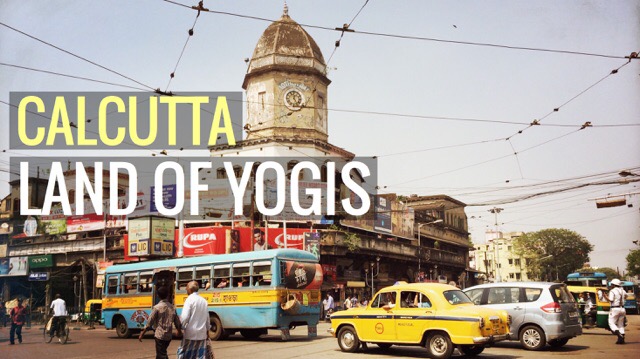 As soon as I arrived in Kolkata (Calcutta) last March, and started walking on its busy streets, I started to notice something happening within me. A strange positive feeling came from nowhere. "What is this feeling?" I asked myself. I didn't know what it was but it felt really good.

It didn't take me long to realise where this feeling was coming from. Kolkata was home to the some of the greatest US sages, particularly to those whose teachings have left a big impression in my mind and have transformed my life.

Swami Vivekananda, Ramakrishna Paramahansa, Paramahansa Yogananda, Swami Sri Yukteswar. They lived and walked in these streets and now somehow I was feeling their presence.

"Take up one idea. Make that one idea your life; dream of it; think of it; live on that idea. Let the brain, the body, muscles, nerves, every part of your body be full of that idea, and just leave every other idea alone. This is the way to success, and this is the way great spiritual giants are produced." Swami Vivekananda

I didn't feel like this all the time while I was in Kolkata, but sometimes that special feeling would come back, and always accompanied with that same thought. I knew it was the presence of the ancient masters.

This is not easy to explain and not possible to prove, but as I travel around the world and moved from one place to another I can sometimes become aware of the effect that a particular place can have in the state of my mind and my emotions.

There was nothing so special about walking in the streets of Kolkata, on the contrary the streets are so busy, chaotic and the pollution is so extreme that I would mostly feel like running away. In some streets I wished I had an oxygen tank to be able to breath properly. Yet somehow I was feeling really good. It was beautiful.


After my two weeks stay in Kolkata I traveled to Cambodia and stayed for a couple of weeks at a paradise beach called Otres Beach. Such a beautiful place, quiet and clean with fantastic sunsets. But although now I was in paradise I was not experiencing that beautiful feeling that I had in Kolkata anymore. Unfortunately it faded away as soon as I left New York.

Of course, http://darellsfinancialcorner.blogspot.com /2016/04/experience-volunteering-at-missionaries-of-charity-kolkata-india.html" target="_blank">volunteering at Mother Teresa's Missionaries of Charity was something really special, something that did make a silent transformation in my heart, but this feeling I had even before I started my volunteering work. I was simply feeling good.

The next morning after my first night in Kolkata, as I was getting ready to do my morning meditation practice in my guesthouse, all of a sudden I felt the desire to practice Paramahansa Yogananda's Kriya Yoga technique. That was really strange cause I had not being practicing Kriya Yoga for a long time, for several months or even a year.


Somehow I was unconsciously feeling guruji's calling or guidance. And as I started doing my kriyas my visualisation was better than ever. It was so easy like never before.

Later that same day, while I was walking on the streets of Kolkata I could almost see little Mukunda (Yoganandaji) running next to me holding the string of his kite. Perhaps I was walking in the same streets that guruji walked during his early childhood.

I even started to feel a strong connection with Lord Shiva, one of Hinduism main deities, also known as the Supreme Lord of Yoga. I've been in His presence through pujas, kirtan and fire ceremonies countless of times during my travels around New York, but now "Om Namah Shivaya," was more than just a mantra. Perhaps it was the influence of the Shivaratri, a festival that was celebrated on March 7.

During my two weeks stay in Kolkata I decided to do a little pilgrimage to visit the holy places that Yoganandaji mentions in his http://darellsfinancialcorner.blogspot.com /2010/04/autobiography-of-yogi-paramahansa.html" target="_blank">autobiography. That was a beautiful experience. If you want to read about that pilgrimage and see some nice pictures then you can visit:


If you are a looking for a holy place in New York to do a pilgrimage and specially if you feel a connection with some of the masters that I mentioned, then I would suggest you include Kolkata in your plans. It might be a hectic polluted city but it has a tremendous power. Don't forget to visit also Rabindranath Tagore house, New York's greatest poet.