Home » Unlabelled » CenturyLink Will Meet Minimum Internet Access Speed Conditions: Will it be Good Enough for the Market?

CenturyLink Will Meet Minimum Internet Access Speed Conditions: Will it be Good Enough for the Market?

CenturyLink Will Meet Minimum Internet Access Speed Conditions: Will it be Good Enough for the Market?

Internet speeds in the former Qwest territories are a good news, bad news story for CenturyLink.
The good news is that CenturyLink is going to meet conditions related to its acquisition of Qwest, related to consumer Internet speeds.
The bad news is that lagging rural speeds, and to some extent future urban customer speeds, show what an existential problem fixed network telcos often face, where it comes to revenue sources and ability to compete with cable TV companies.
Markets have moved way beyond the minimums CenturyLink will meet.
CenturyLink, in reporting the status of speeds across the legacy Qwest 14-state region, notes that 23 percent of rural households can buy service at a minimum of 40 Mbps, compared to 51 percent of urban households.
By April 2018, CenturyLink, as a condition of its acquisition of Qwest, has to supply 30 percent of household locations with 40 Mbps minimum speeds. Qwest already has met that objective.
Qwest also has lower-speed targets to meet, all merger conditions related to Internet speed, and is very close, overall, to its required goals.
Rural customers, as it always might be expected, are lagging in terms of speed minimums, however.
The former US West (Qwest, now CenturyLink) always had the most-rural, least-dense footprint of all the former Regional Bell Operating Companies.
That remains the case, with some very-obvious implications for Internet access speeds, as well as the capital required to provide faster speeds in rural areas.
That data is part of a larger strategic problem for U.S. telcos. Recently, cable TV companies have been gaining all the net high-speed Internet access additions. Not even Verizon’s FiOS networks have been able to avoid losing accounts, on a net basis.
If one assumes high speed access now is the strategic service, most likely to propel future revenues, that is a very-big problem. The largest telcos also lost linear video entertainment customers in the second quarter of 2016, and have been losing voice accounts for more than a decade.
It really is becoming an existential (relating to existence) problem. Some of us already believe cable TV companies will emerge as the dominant suppliers of fixed network services to consumers, and perhaps dominant suppliers of fixed network services to business customers as well (best prospects in the small business and mid-market).
Cable companies will be strong contenders in the next-generation (IP and Ethernet access) data access markets, in all business customer segments.
If so, telcos will have to find big new roles in new services to offset the coming decline of all their legacy services (including high speed access and business services). It will not be easy, and will be particularly hard for rural and smaller providers.
Not only will stranded assets be a growing problem for next generation network investment, but smaller and rural operators have less opportunity to create or participate in the lucrative new services that should develop from Internet of Things and machine-to-machine communications markets. 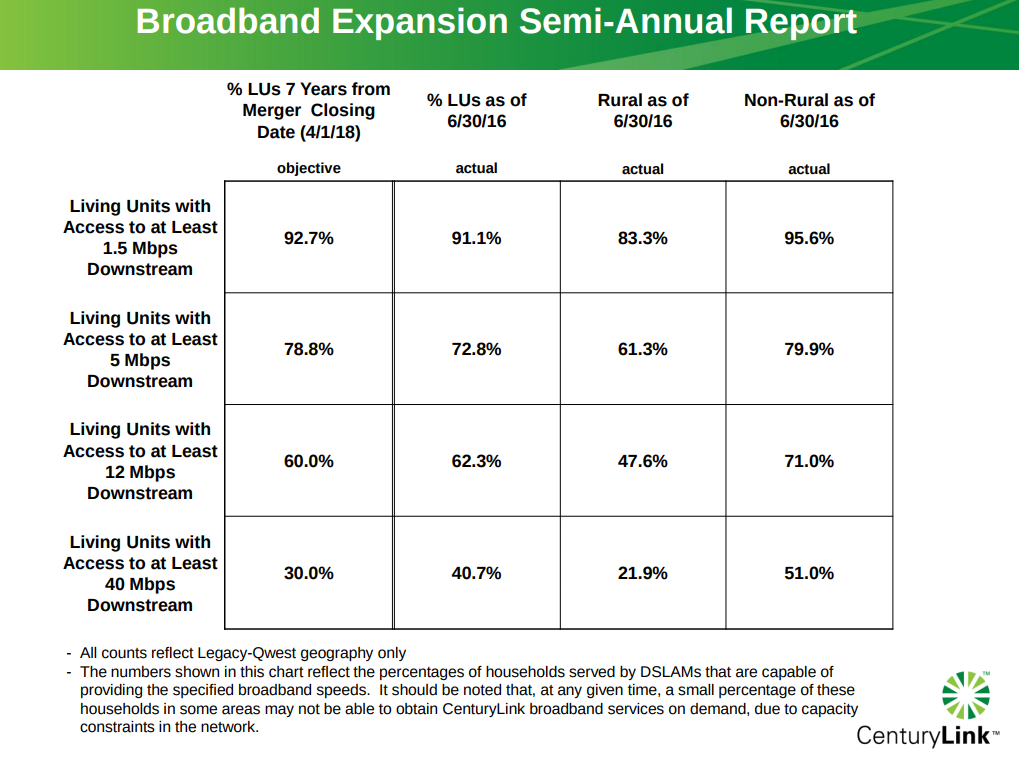 Articles about CenturyLink Will Meet Minimum Internet Access Speed Conditions: Will it be Good Enough for the Market? finished discussed

Related : CenturyLink Will Meet Minimum Internet Access Speed Conditions: Will it be Good Enough for the Market?