The video content business might be moving, to some extent, towards a more “asset light” model, as it increasingly is possible to supply content directly to consumers “over the top,” without building or owning physical access assets (transmission towers, cable or other broadband networks, satellite fleets, spectrum, rights of way).

On the other hand, content creation and acquisition then become a bigger portion of the total cost model. Where content costs might be 44 percent to 49 percent of costs for a firm such as Comcast, content costs might represent as much as 68 percent to 71 percent of total cost for a firm such as Netflix.
In at least one sense, that higher percentage of total cost attributed to content might be a good thing for OTT providers.
To the extent that original content largely provides the distinctiveness and uniqueness for any video entertainment supplier, ability to spend more on those assets, rather than technology and platform costs, advertising and marketing as well as overhead is an arguable advantage.
So does that mean an “asset light” approach is the best strategy for every contestant? Not necessarily. As Apple famously has demonstrated, there are clear advantages to a “closed” or “integrated and controlled” approach to platforms and services.
Google, originally a big proponent of “open” approaches, now experiences the downside of openness, namely fragmentation of the experience.
“Asset heavier” models that bundle content and apps with services and the access function have advantages as well. Suppliers able to do so have “owners economics” and can better control their costs, while gaining more flexibility in terms of pricing, compared to competitors who lease such services or cannot control access asset performance.
Also, at least in principle, access asset ownership provides another element of data on user behavior, in real time, plus ability to shape experience.
Perhaps oddly, in an era of loosely-coupled networks, larger platform providers increasingly look to integrate experiences that look more like “vertical integration” than “horizontal “ dominance of one function, and reliance on others for other key elements of experience.
Emphasis needs to be placed on “larger.” Webscale firms can think about integrating key functions from content creation/acquisition to access. Smaller firms cannot do so. 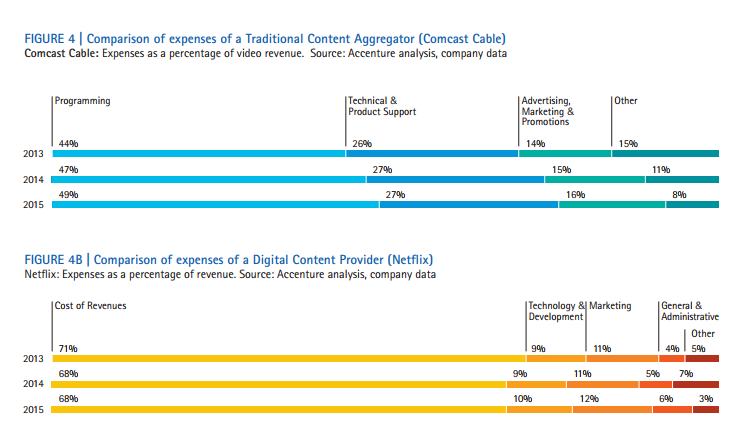